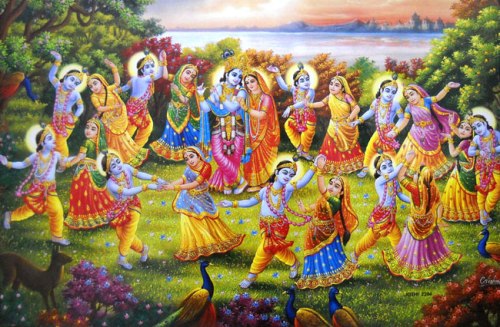 Bhakta Kavi Jayadeva Goswami, was a Sanksrit poet during the 12th century. He is most known for his epic composition Gita Govinda which vividly describes Shri Krishna’s love for Gopikas in general and Radha in particular.

The Gita Govinda is organized into twelve chapters. Each chapter is further sub-divided into twenty-four divisions called Prabandhas. The Prabandhas contain couplets grouped into eights, called Ashtapadis. The poem presents the view that Radha is greater than Shri Krishna, is considered an important part of the Bhakti movement, in which Jayadeva describes Lord Shri Krishna’s yearning for Radha!

The poems also elaborates the eight moods of the Heroine, the Ashta Nayika, which has been an inspiration for many compositions and choreographic works in Indian classical dances.

Jayadeva was born to Kamalabai and Narayana Sastri, a very pious Brahmin couple. Kamalabai was very devout and longed for a child. She prayed to the Lord to be blessed with a child.  One night, Lord Krishna appeared in his dream and told him that his wife’s prayer would be fulfilled and they would soon be blessed with an illustrious son. Soon, Kamalabai gave birth to Jaya Deva.

Jaya Deva was very devoted to Shri Krishna from his childhood and his Upanayanam ceremony was performed when he was only five years old.  He learnt the scriptures at a very young age and was incessantly lost in prayers of Shri Krishna.  His parents left for Vanaprastha after sometime and Jayadeva led a nomadic life with no fixed abode.

One day, he had a divine visualization and went into an ecstatic state. In his divine vision, he saw the Yamuna River flowing through four Blue Mountains. Beside the river bank, under a tree, Lord Shri Krishna was playing his flute delightfully. The vision of Krishna and His music enthralled Jayadeva so much that he composed a Shloka extempore. This gave birth to the famous epic, ‘Gita Govinda’, validating the words ‘Poetry is a spontaneous overflow of powerful feelings and emotions’.

Jayadeva described Sriman Narayana’s Dasha Avataar in his first Astapadi ‘Jaya Jagadeesha Hare! He had a visualisation of these ten avatars and was in a trance as he witnessed the vast ocean which depicted the presence of God in His vast creation. He prayed to the Lord and sought his blessing.  Later, he went to Jagannath Puri Temple with his friend Parasara and spent all his time in prayer, meditation and chanting the name of the Lord.

Deva Sharma, a Brahmin in Puri, had a daughter by the name Padmavathi.  As he was keen to get his daughter married, he prayed to Lord Jagannath for His blessings. The Lord appeared in Deva Sharma’s dream and advised him to perform her marriage with His ardent devotee Jayadeva.

Accordingly, Deva Sharma and his wife went in search of Jayadeva.  When they found him they told him of Lord’s wish. Jayadeva refused to marry as he was leading the life of Sanyasi and said he was unfit for Grihastadharma. But Deva Sharma refused to accept that and since it was Lord Jagannath’s order, he could not go against it.  Jayadeva was forced to oblige as he too wouldn’t oppose the Lord’s wishes. He married Padmavathi and came back to his village Kendybilva and they lived happily there and prayed to Radha Madhav in their house regularly.

After sometime Jayadeva went on a pilgrimage. On his way he met King Lakshmana Sena who was very much impressed with Jayadeva and forced him to stay with him and accepted him as his Guru. Later, Padmavathi joined Jayadeva, and the King was surprised to learn that his Guru was a Grihasta.

Jayadeva explained to the King that one can be a Sanyasin even as a Grihasta if one is performs one’s duties without attachment to the fruits. He explained that renunciation meant gaining control over the mind and all the senses. Jayadeva’s life is an example to the world that God-realisation can be had even as a Grihasta. Several other Saints such as Swamy Desikan, Ramakrishna Paramahamsa have gained self realisation while leading the life of a Grihasta.

Padmavathi was a perfect match for Jayadeva as she too was a pious lady and was inspired by her husband’s faith, treated him like a God. She spent her hours in spiritual discourses to other ladies in the court. The Queen too was one of her disciples but unknowingly had the pride of a royal family that propped up every now and then.

Once Padmavathi was discussing Sati Sahagamanam with the Queen. She opined that ‘whoever dies on her husband’s funeral pyre is not a great lady. A true wife is one who breathes her last, the minute she hears of her husband’s demise.’  The Queen wanted to test Padmavathi on her assertion, so she decided to play a practical trick on her.

The next day she informed Padmavathi, with tears in her eyes, that Jayadeva was killed by a lion while accompanying the King in the forest. As soon as she completed her statement, Padmavathi fell unconscious and upon close examination the Queen discovered that Padmavathi had breathed her last! The Queen was shocked and remorseful of her action and was worried how Jayadeva and the King would react to her foolish behaviour. While the King got furious, Jayadeva was not perturbed and he picked her up and prayed to God.  Within no time Padmavathi woke up as if from sleep and she too joined their prayer. The Queen was relieved and humbly acknowledged the Bhakti of Jayadeva and the pious nature of Padmavathi.

After some time Jayadeva came back to his village and while residing here, he composed his famous  “Gita Govinda”.

Jayadeva wrote poem Gita Govinda which celebrates the glorious divine love of Radha and Krishna. The Gita Govinda comprising of Sanskrit songs describes Shri Krishna’s courtship of Radha. With lucid and tender lyrics, the Gita Govinda explored many aspects of love and passion.

At a mundane level, it narrates the love of Radha and Krishna as simple cowherds, but at a spiritual level the poem describes the union of JivAtma with ParamAtma.

Meaning
O’ love, place the tender-leafy foot of yours on my head as it is an antidote to the venom of Love God…

But as soon as he penned these lines, he rubbed it off immediately and felt extremely guilty. He threw away his pen and with a wavering mind got up from his seat.  His eyes welled with tears as he lamented, ‘What sin have I committed… Apacharam…Apacharam.  How could I write these lines? How can a devotee (Radha) place her feet on Lord Krishna’s head?

Jayadeva felt very restless and could not stop thinking of the sin he had committed.  He walked out of the house towards the river bank.  After seeing her husband’s restlessness Padmavathi prayed to Lord to help her husband complete the compositions of Ashtapadi without any break.

Padmavathi expressed her surprise and went to get the shlokas and the stylus.  Jayadev said ‘I was struck with the poem but got flash with wonderful lines to complete the poem and so I came back.’

Meaning:
O’ Dear Radha, your tender-leafy foot is an antidote to the venom of Love God. Please place it on my head, and make it my motif and my glory… for that scorching fire of Love God is burning me intolerably… hence, tread my body to tread on that Love God, to tread out his fire and its abnormalities.

After that he asked Padmavathi to arrange water for his bath and his bath, he offered nivedanam to God and had food and dozed off comfortably on his bed.

A little while later, Padmavathi began to eat, but there was a knock on the door again.  She was shocked and confused to see Jayadeva standing before her. Jayadeva was even more than surprised and questioned her ‘What’s wrong with you today? Have you ever dined before offering food to the Lord or before I had my food? I have never seen such a thing before!’

Padmavathi was even more shocked and stammered, “but you came back from a little while ago, took the poem, and completed it. After that had your bath, did prayers, had food and were resting. Jayadeva immediately knew what might have transpired and rushed into the room. But nobody was there in the room. He asked Padma to bring the Shloka to see how it was completed. He had guessed it right! The Lord Himself came to complete the poem and had written the same words as Jayadeva had originally composed it.

Jayadeva was ecstatic at one level that his composition was accepted by the Lord but at another level felt sad that he missed Lord’s Darshan.  He thought, how lucky Padmavathi was as she saw the Lord and served Him personally. He cried unto the Lord. O’ Prabhu, O’ Krishna! What wrong have I done that you did not grace me your Darshan? You left me out and blessed Padmavathi alone.’ He grabbed the food from Padvamathi’s leaf since it was the food enjoyed by the Lord Himself! He did not care for Padmavathi’s protest that he was eating from her half-eaten leaf.

After this incident, Jayadeva completed his Gita Govindam with renewed vigour. He was deeply involved in his songs and sang them wholeheartedly. The Lord followed him, invisibly and wholeheartedly, to listen to his rendition.

The Ashtakas are sung before Lord Jagannath during the annual festival. People were struck with the splendid music and poetry of Gita Govinda and praised it highly. The fame of Jaya Deva reached far and wide.

Once a woman was singing the Gita Govinda beautifully in the forests as she was collecting fruits for her daily trade. Lord Jagannath was very pleased with her singing and He began to wander in the forest after her to hear her rendition. The Lord’s garment was torn to pieces while He was running all over the forest, as it was caught in the thorny bushes of the forest.  Next morning, the priest of the temple and the King saw the Pitambara of the Lord in rags. They were not able to find the reason for the torn condition of the Pitambara. They prayed to the Lord to make them know the reason.

The Lord appeared in their dream and said, ‘A woman was singing Gita Govinda in the forest. I ran in the forest to hear her song. When I ran, the Pitambara was torn to pieces by the thorns.’

Jayadeva had taken a vow that he would take bath in the Ganga till the end of his life. As he became old he became indisposed. The King offered a palanquin to Jayadeva but he declined to accept it. Due to his tapas, Ganga herself appeared with lotus flowers in the well of Jayadeva’s house.  Finally, Jayadeva attained the Lotus feet of Lord Shri Krishna.

Every year on Sankranthi day, a big event is organised in memory of Jayadeva in his village Kendubilva and devotees chant Gita Govinda.

Such was the glorious life of Jayadeva, one of the greatest devotees of Lord Shri Krishna.  He led a simple, humble, unpretentious life with no possessions, and always found joy and happiness in meditating on Lord Shri Krishna, and was a perfect embodiment of forgiveness.

Glory to Jayadeva Goswami whose life inspires us all!

A Jigyasu with a deep interest in philosophy and spirituality. This blog is devoted to gain a deeper understanding of our Shlokas and Scriptures. I have written the commentary by drawing into various sources to bring together the essence in an easy to comprehend manner. Please also visit: http://www.sridharraman.blogspot.co.uk/ for my views and opinions on economic issues, politics, leadership and other management topics. Related Blog on short stories: http://jyotsnaaiyangar.blogspot.com/